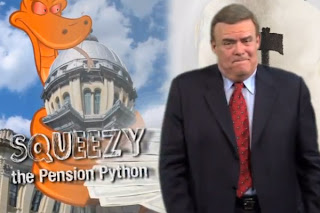 It would be hilarious if it wasn't so tragic. It's not only the low point of this once-progressive governor's career, it is characteristic of the buffoonery that marks state Democrats' attack on public employees' pensions and on their own political base. Of course I'm referring to Gov. "Squeezy's" pet python and his "grass-roots" campaign to "reform" the pension fund.

It all makes me wonder:   first, why are we taxpayers footing the bill for this crap? And second, what idiot on the gov's staff ingested enough drugs to come up with Squeezy? As I said the day Quinn was chased out of the state fair by thousands of pissed-off union members down in Springfield -- he's toast.

The school board appointment means that two former CPS principals — Azcoitia and Mahalia Hines — will be voting on what could be the closure of scores of schools as the system begins to “right-size’’ the nation’s third-largest school district. -- Sun-Times

If we had an elected school board, I would be applauding the selection of Carlos Azcoitia. But with the mayor continuing his assault on neighborhood schools, I take little comfort in his appointment to Rahm's  rubber-stamp school board. Azcoitia has been one of Chicago's best community educators with a legacy of leadership in the creation of two wonderful small schools in Little Village -- Telpochcalli and Community Links.

But I'm sure that autocrat Rahm made it clear before appointing educators Azcoitia, Hines and CEO Barbara Byrd-Bennett to his billionaire-dominated board that he expects nothing less than their uncritical support for the Civic Committee's plan to close 100 neighborhood schools in the city's most under-served black and Latino communities to pave the way for 100 privately-run charter schools. There are no NO VOTES allowed on Rahm's hand-picked board.

But it's still hard for me to imagine Azcoitia playing a role in the closing of some of the very schools he helped to create. Nevertheless, the CTU, parents and community groups aren't going to sit around hoping that Azcoitia, Hines, Byrd-Bennett or anyone in the City Council will have enough spine to stand up to the little autocrat when push comes to shove.

Resistance to the school closings has already succeeded in forcing the Board's current stall tactics. Now they want to delay providing us a list of school closures until March 2013. And they want to undercut the power of the Chicago Educational Facilities Task Force (CEFTF) by establishing their own school-closing commission that meets in secret.

But this won't fly, as I'm sure CTU President Karen Lewis will tell the City Club when she speaks at their luncheon this afternoon.