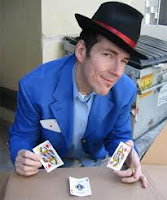 Damn! No sooner had I posted about Byrd-Bennett's school-closing trickery, then she came up with another bit of Three-Card Monte. She's really good.

BBB's enigma, wrapped in a riddle, surrounded by mystery, goes like this: When is a moratorium not really a moratorium? Answer -- when BBB calls it a turnaround, instead of a closing. Sure, you're firing all the school's teachers and replacing them with lower-paid, non-union newbies. Sure you're handing the school over to private charter operators. But that's not exactly the same as closing -- is it? And finally, the post-moratorium closings aren't about "right-sizing," says CPS liar-in-chief Becky Carrol. They will be done for "academic reasons." Get it?

Thanks to PURE's Julie Woestehoff for finding the pea under the middle card.


She says a “turnaround’’ has the same affect of a “closure” on adults in a school. “This seems to be more evidence to suggest that this is a phony moratorium. It’s a moratorium whose details are TBA. How can people sign on to support something when the details seem to change from hour to hour? It sounds like a moratorium of convenience and nothing that can be trusted or supported by Chicago parents.’’

The editorial in yesterday's Sun-Times said it best:


A five-year moratorium on Chicago school closures proposed by Mayor Rahm Emanuel sure sounds good — as long as you don’t think too hard about it.