Rahm is the master of division 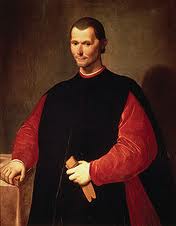 There is no surer way of corrupting the citizens, and to divide the city against itself, than to foment the spirit of faction that may prevail there; for each party will strive by every means of corruption to secure friends and supporters. -- Niccoló Machiavelli, The Discourses. 1517.

Rahm is the master of division. No, I don't mean he could ever teach an elementary level math class. He wouldn't last a day. I mean that everything he does in a school system that he personally rules seems designed to divide the school community -- parents from teachers, teachers from teachers, students from teachers, principals from principals, etc...

The latest lesson in Machiavellian division can be found in his bonus program for principals whose schools have the highest test scores. Oh yes, I know his Communications Dept. puppy dogs will claim the bonus formula includes 4 measures (improving test scores, raising the percentage of students who graduate and who are ready for college, and decreasing the achievement gap), not just one. But everyone knows that's bunk. I'll show you why.

Take the measure of closing the achievement gap. How does the principal of a selective enrollment school like Keller Gifted or Whitney Young H.S., which accept only the very top test-takers in the city, take personal credit for closing the achievement gap? Explain, please. Furthermore, how does any principal of a racially segregated school in a racially segregated school system take personal credit for gap-closing? And how is that gap closing measured except through the manipulation of standardized test scores?

Here's more evidence of this phony gap-closing. Catalyst reports that,

*Principals at high schools where more than 95 percent of students receive a free or reduced-price lunch were a little over half as likely as other high school principals to receive bonuses: 4 percent vs 7 percent elsewhere.

*More than half of all high schools are at least 80 percent African-American or 80 percent Latino students. But just two of the 10 high schools where principals got bonuses fall into this category.

And tell me, please, why the principal of a "gifted" elementary school, already pulling down $142,000/year, needs another  $20,000 in private bonus money to motivate her to get scores up and make her 240 kids "college ready"?