In L.A. the least experienced teachers are being placed with the neediest kids 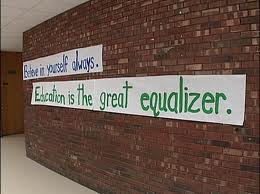 A new Harvard study shows the so-called "achievement gap" growing wider in L.A. as the neediest of the district's students are taught by the least experienced teachers. Under Supt. John Deasy's control,  LAUSD has increased its reliance on extended substitutes and TFA five-week wonders as an austerity measure and a way of undermining the union contract. First-year teachers are assigned to students who begin the year academically behind students assigned to more experienced teachers.

According to the L.A. Times:


No single finding can produce a strategy to erase the district’s substantial achievement gap between white students and their black and Latino classmates, the study said, noting that the difference in performance on fifth-grade math tests is roughly equivalent to more than one and half years of learning.

The study also shows the limitations on the district's use of value-added or "teacher affects" evaluation based on student standardized test scores.


Further, teacher effects are only as good as the assessment used to formulate them. Assessments that are insufficiently challenging or that are poorly aligned to the curriculum that the district expects its teachers to cover will not yield useful estimates.

Yet, it is just those types of assessment that the study and the district rely on to generate their evaluations.
Posted by Mike Klonsky at 5:27 AM