Reason No. 54 why we need an elected school board 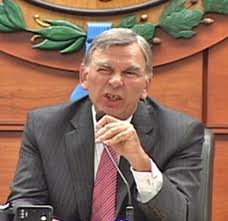 If you're looking for another reason to replace the mayor's hand-picked school board with an elected one, look no further than yesterday's school board meeting. CPS board meetings continue to be a place where citizens come for their monthly share of abuse. Yesterday it was CTU Recording Secretary Michael Brunson being insulted and yelled at by a vitriolic board president, David Vitale.

As Brunson got up to speak, Vitale, had the nerve to accuse him and the CTU of "spreading lies" and "threatening and intimidating the board" as the union, along with parents and community groups attempt to stop the board's arbitrary school closings in under-served neighborhoods.

Wait! What! This coming from the former bank president who was even booted from his position as head of the Chicago Board of Trade for not being able to play well with others. It was Vitale himself who was slinging the bullshit when he falsely accused the union of marching on his house to protest school closings (not a bad tactic in my book), claiming that his daughter was home alone and scared by the protesters. Acually (rumor has it) the Vitale kid was so excited, she called up her friends and they all came over and joined the peaceful protest.

What got Vitale's shorts in a twist was this public promise made by CTU V.P. Jesse Sharkey:

Sharkey was simply telling the truth.

The union also denied that it organized the march on Vitale's house.

Another Vitale lie -- or at least a fudging of the truth -- came when he leaped to the defense of fellow billionaire board member, Penny Pritzker. Vitale claimed that the union was lying when it said that Pritzker had received  $5.2 million in city TIF funds for the development of her Hyde Park Hyatt Hotel. Yes, technically, the money didn't go directly into Penny's purse. Instead it went to the developer. But Pritzker is definitely a beneficiary and her position on the cash-strapped board makes her at least an accessory to the crime and a board member with an obvious conflict of interest. TIF money should be going to schools first and to wealthy, no-tax paying corporations last.

The point of all this is that Vitale,and the board don't appear to be trying to reach an accommodation with teachers and parents. Rather, under Vitale's leadership, they appear to be heading towards another major confrontation with the union and the community, having learned nothing from their defeat in the strike. Vitale's outbursts are also putting new CEO Barbara Byrd-Bennett in a difficult spot and she tries to keep her commitment to more community involvement in the process -- something that Vitale obviously abhors.

If you want to know reasons #55 and 56, come to next month's board meeting.