Rahm stalls on revealing his school kill list (minus drones, we hope) 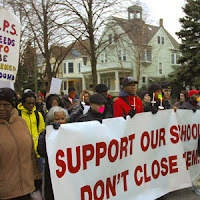 Rahm and his hand-picked school board can't afford drone warfare. But they have a kill list just the same, when it comes to schools in the city's most under-served neighborhoods. They just aren't showing it.

In the face of growing community anger and protests, they've switched to stalling tactics and other tricks to get around Public Act 096-0803 which was supposed to “ensure that school facility-related decisions are made with the input of the community and reflect educationally sound and fiscally responsible criteria.”

This afternoon at UIC, Rahm's sham School Closing Commission is set to meet from 1-3 P.M. Of course, no public input is allowed. But I'm told, mic-checks may be forthcoming. Rahm created the commission as a way of circumventing the legally established Chicago Educational Facilities Task Force (CEFTF).

Tomorrow, the Illinois General Assembly will hold a hearing in Springfield to consider the CPS stall plan.  CTU Political Director Stacy Davis Gates, is asking that we make contact with our elected leaders and speak with members on the Illinois House Executive Committee. Demand that they do NOT extend CPS an opportunity to change the law again.
Posted by Mike Klonsky at 10:00 AM