Sun-Times has a 'democracy problem" of its own 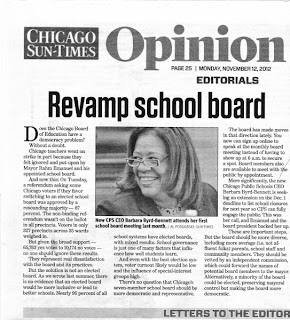 The landslide victory for Chicago's elected school board referendum has the Sun-Times editorial board in a tizzy. Today's editorial begins by answering its own question:


"Does the Chicago Board of Education have a democracy problem?  Without a doubt."

I mean -- problem with democracy? Our autocratic mayor's hand-picked, elitist billionaire board has never even had one dissenting vote, even while the top-down reform policies under mayoral control since 1995, have yet to produce any significant improvement in the schools or in the lives of their students. Parents and community members are routinely shut out of the real policy discussions affecting their kids. Board members have been the targets of investigations involving financial misuse, and on and on.

I know what you're saying. Something like -- Well, duh! Your public schools system is now a wing of Chicago City Hall, probably the most corrupt institution this side of Tammany Hall. What did you think would happen? [Good point, by the way.]

The Sun-Times editorial board, while recognizing that 87% of voters favor an elected board, immediately begins back peddling and rationalizing on Rahm's behalf. While "no one should ignore" the referendum, it is, after all non-binding and "wasn’t on the ballot in all precincts." Voters in "ONLY [my caps] 327 precincts across 35 wards" weighed in.

Of course the reason it wasn't on the ballot citywide was because the mayor's new puppy dog in the City Council, Ald. Joe Moore, blocked it in committee. But it's only reasonable to assume that if it was on the ballot in other precincts, the vote would be the same.

So recognizing that they are bucking a near unanimous anti-Rahm, anti-board tide here, they offer some concessions. They are willing to accept a continued mayor-appointed board that is "more diverse" including some (but not too many) "average (i.e. not affluent folks) parents, school staff and community members" who could be "vetted by an independent commission," which then could forward the names of potential board members to the mayor."

Or umm, how about this -- a minority of the board could be elected, preserving mayoral control but making the board "more democratic".

In other words, anything and I mean anything except a democratically elected board like the ones in every other school district in the state, except Chicago's.

MEANWHILE BACK AT THE HYATT


Hundreds of teachers and supporters are using their Veterans Day holiday to rally at City Front Plaza, hold a mock trial and march on billionaire school board member, Penny Pritzker's Hyatt Hotel, demanding a moratorium on school closings.