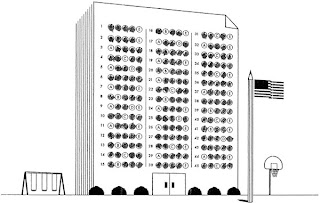 Michael Brick, writing in yesterday's N.Y. Times, ("When Grading is Degrading") offers a devastating appraisal of current reform policies which are based increasingly on fostering competition and on grading schools and teachers. Brick takes a look at the situation in Texas, which he calls "nobody’s model for educational excellence", where the state has long used complex algorithms to assign grades of Exemplary, Recognized, Acceptable or Unacceptable to its schools.


So far, such competition has achieved little more than re-segregation, long charter school waiting lists and the same anemic international rankings in science, math and literacy we’ve had for years.

Actually Brick is wrong about the "nobody" part. Chicago's mayor, Rahm Emanuel, with coaching from Stand For Children's Jonah Edelman, held up Houston as his model for his imposed longer schools day, making wild, unsubstantiated claims about Texas miracles.

Another brick (sorry!) in the testing wall fell to the ground in PA when federal education officials denied the state's request to evaluate charter school achievement using more lenient criteria, saying they must be assessed by the same standard as traditional schools.

Diane Ravitch finds it "interesting that the announcement was made on the day before the long holiday weekend, which meant that someone decided to bury it."