On the ground in Chicago 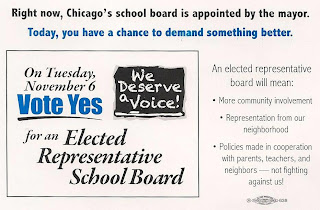 This post was written by guest blogger Bob George. Bob is a member of the National Steering Committee of Save Our Schools (SOS).

A day in the life

Over the past several days I had the privilege of being involved in several Chicago education events with Parents, Students, Teachers, CTU and Core members. On Thursday evening, the Black Caucus of CTU sponsored a discussion with CTU President Karen Lewis, on the recent teachers strike, the implications for the community, and what’s next.

Several Black community leaders were on hand as Karen laid out the strike story.  Carl West the owner of Truth Be Told news service asked Karen to describe the process of how CTU came to Strike.
Karen said:


“The strike bubbled up from the Rank and File!” As the membership’s voice was heard they expressed their anger at the injustice of a system that treated children as numbers, regularly underfunded minority schools, had no books on hand to start the school year…  a system that is three times more likely to provides less than half a day of nursing services and social work services to poor and minority schools, a system that tests and tests and tests. The rank and file had enough!!!! The strike was not lead from the top but rather guided from the bottom. It was about RESPECT.

The leadership was responsive to the membership. It was a means of empowering the people, as the drivers of change. CPS has had four CEOs in two years, more than 86 schools closures, 101 charters opened, yet the performance of the school district has not measurably improved. In reading scores the aggregate of the charter schools performs at a rate 10 % points below the aggregate of the public schools.

Hundreds of millions of dollars have been spent on this experiment of privatization in Chicago with mediocre results in the classroom. Yet these changes have had horrendous impact on the communities they affected. 87 % of the schools closed were schools of predominately children of color, schools in poverty, community schools that were an anchor of the neighborhood

As the schools closed the children were dispersed their sense of safety of belonging was lost. Some even lost their lives as they were forced to cross gang lines to go to new schools. Millions of ARRA dollars were spent to alleviate the distrust, violence and trauma the closings caused. Yet even now, the school board and the mayor persist that more schools will be closed for fiscal reasons. At the same time they made a commitment to the Gates foundation that 60 additional charters will be created in the next four years.

After Karen spoke, there was a panel of teachers from the Black Caucus.

Tara Stamps a CTU middle school teacher and Black Caucus leader spoke passionately about the lives that are being neglected in her community because the schools are harmful for the “babies” the black children enrolled in them. Her mother taught her to give back to her community. She extolled the need to create a moratorium on school closures to save the lives of the “babies”.


These are our children who are being tested and not taught, whose safe schools are being closed and whose teachers are being disrespected. Children absorb that poison we must make sure that the atmosphere they grow up in the schools they attend and learn in respect them. Honor their inherent desire to learn.

Soria Lofton, a nurse, spoke to the lack of counselors, nurses and social workers to support the children and their families. A school in a high-poverty neighborhood is three times less likely to have even minimal time from these three critical professions.

Brandon Johnson a High school teacher spoke to the phenomena of  "Educational Apartheid" practiced by CPS since 1995. During that time Chicago schools went from 45% of the teachers being Black to 19%. This undermines the solid middle class jobs that black women held that are so important to the community. Furthermore the role models that all students need are increasingly not there for black children

The final speaker Stacy Davis Gates reminded all of us that we must hold the legislators feet to the fire when it comes to school closures and elected boards. The people work for us not us for them. The legislature passed every thing that has happened regarding closures and mayoral control of the board. We must work to create the conditions in which the people we elect listen to the needs of the community by letting them know we are watching and will support or oppose them based on how they vote on pour core issues