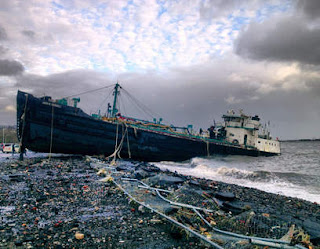 The most compelling Tweet this morning comes from Chris Policano ‏@cdpolicano:


The government. Hated by conservatives. Until suddenly it isn't. #FEMA”

No one knows for sure how Sandy will affect polling says pollster supremo Nate Silver. How any of those 50 million people (voters?) whacked by Sandy could support the candidate who calls for the liquidation and privatization of FEMA and who mocks the idea of climate change, boggles the mind. Conciliating Dems are also proposing big cuts in FEMA funding, 3% as compared with 40% by proposed by the Republicans --this as a first step towards liquidation.

Aside from the closing of thousands of storm-threatened schools, I haven't heard much yet about the damage to schools in N.Y. and New Jersey and what impact the storm will have on public education. But I can't help thinking about what happened in the wake of Hurricane Katrina when Arne Duncan called the storm, "the best thing that happened to the education system in New Orleans."  Katrina opened the door for the privatization/charterization of New Orleans school public school system and with it, the firing of every public school teacher and the destruction of the teachers union.

Duncan was only echoing pal Rahm Emanuel's charge to never let "a crisis to go to waste" and that of their mentor Milton Friedman who described Katrina as "an opportunity" rather than a disaster.

I'm sure Mayor Bloomberg in N.Y. and Gov. Christie in N.J. would both relish such an "opportunity."