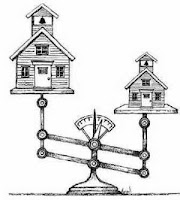 Tom Hoffman doesn't mince any words with Commissioner Gist over the destruction of small schools in Providence.

The work done in small high schools opened in Providence over the past decade is being quickly and unceremoniusly ended in the name of uniformity and strictly standardized curriculum. (Tuttle SVC)

In Oskosh, smaller may be better, but...

“Small schools do a better job educating kids, but there is a point of no return. I’m sorry. I’m going to have to support closing green meadow and Lincoln,” said board member Dan Becker. (Northwestern.com)

Georgia has one of the lowest grad rates

Like Georgia, nearly half of the 17 states probed in the national study showed some improvement in their overall graduation rates during the study period. North Carolina gained some traction in improving its graduation rates, the report said, and became a leader in innovation with the New School Project, a public-private partnership that created up to 100 small schools designed to help students earn both a high school diploma and an associate’s degree, tuition free, in five years. (AJC)

And in Howard County, they're closing Friendship Elementary...

"It's a small, older school, but the infrastructure isn't old. It's well maintained," he said. "The staff seems to have a lot of longevity there. The staff seems very cohesive. "For me, the big draw is just the small school. They're making these mega-schools now. The kids could easily get lost in the shuffle."(Howard County Times)