Duncan at the AFT Conference 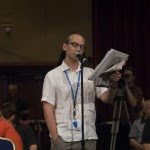 As he sat on a stool yesterday next to federation President Randi Weingarten, Duncan, in a gesture of solidarity, wore a button the union had distributed to the audience: "With us, not to us."--Washington Post
Boos and comity

It sounds like Arne Duncan turned a typically boring meeting into a hazardous-duty adventure.

Members of the Chicago local laughed, almost theatrically, when Duncan claimed to have supported broad, community-based anti-poverty efforts while working as that city's superintendent. A series of questioners pressed Duncan to reevaluate his positions. One teacher from West Virginia told him that after merit pay was instituted at her school, "The result of this has been a crash in morale. ... We are looking upon it as a very elaborate process of favoritism." Duncan was conciliatory. "That system...has a lot of work to do," he said to the West Virginia woman, "I appreciate your frustration." To a questioner concerned about charter schools weeding out special-education students, he replied, "To be clear, I'm not a fan of charters. I'm a fan of good charters." For that, he was gifted with disbelieving boos.

That's not to say there were no genuine points of comity at the event. Duncan's take on No Child Left Behind won him plaudits. He praised NCLB's success at dis-aggregating achievement numbers by race and class, while criticizing the legislation for being underfunded and stigmatizing "failing" schools. Most significantly, he used NCLB's existing state-by-state standards system to make a plug for common national standards, a concept that seemed popular with the crowd. Under the Bush administration, NCLB was "very, very loose on the goals...and they were very, very tight on how you get there. I want to fundamentally flip that," Duncan said. "I think it's backwards." (Dana Goldstein, American Prospect)