Duncan at the NEA meeting 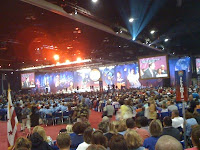 7,000 delegates. Lots of boos when Duncan says he want to tie teacher pay to test scores. Even my brother booed despite Andy Rotherham's admonition. But Fred points out something that most bloggers, obsessed with the booing (who never talked with teachers on the floor) missed. Many, if not most of the delegates seemed OK with Duncan.

Back to the speech

Lots of Arne's usual cliches--"the status quo is not good enough"..."it's a moving train and we all need to get on board." More of the same about Chicago's miracle "turnaround." No mention however, of the Civic Committee's report which blows all that away (surprise, surprise). He once again blames schools and teachers for "perpetuating poverty and social failure." He even told the teachers that they could "no longer blame the system." The system will be glad to know that.

But on the whole, there seemed to be an NEA buy-in to Obama's larger agenda of school funding and union participation. It's definitely a major shift from the Bush days and it offers new openings for partnership and for unions to organize amongst the growing base of disenchanted charter school teachers. Faced with the inescapable evidence of charter school failures, Duncan said: "Charter schools are public schools and they should be held to the same standards as everyone else." Did KIPP, Civitas and the NLRB hear that?

No wonder the privatizers and union-busters are nervous and here. For that matter, so is the left. I think Obama likes it that way. Fordham's Andy Smarick loved it. He admires Duncan's verbal gymnastics.

Finally, after all of Duncan's "ton-of-bricks" threats these past few weeks, this statement made me chuckle:

The President and I have both said repeatedly that we are not going to impose reform but rather work with teachers, principals, and unions to find what works. 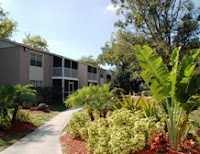 Iif you buy that, I have this condo on Florida's Gulf Coast for sale. Call me. (:>)

Anti-union blogger/spy Mike Antonucci, who hid out during the entire meeting in the press area, went so far as to call my brother, the PREAPrez, "lame".

Duncan even harks back to his days in the small-schools movement:

"After that, I helped start a small new traditional neighborhood public school - the Ariel Academy. It wasn't a charter. It had union teachers and today it is one of the highest-performing public schools in Chicago - even though all of the kids come from poverty."