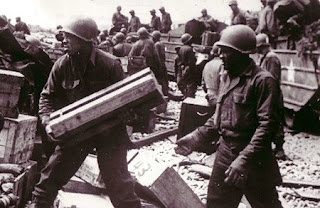 Soldiers of the all-black 320th Battalion landing on the beaches of Normandy, France, shortly after dawn on June 6, 1944.
Pat Buchanan invoked a string of white supremacist arguments in making his case against Obama's Supreme Court nominee, Sonia Sotomayor. When asked by Rachel Maddow, why the Supreme Court has historically been a white men's club, Buchanan gave this account of U.S. history.

Buchanan's diatribe, which obviously ignored centuries of black and brown labor, not to mention slavery (how could he not mention slavery?) in the building of this country, also purposefully whitewashed the pages of military history. Since Buchanan prides himself on his knowledge of history and knew full well that the Sotomayor appointment was a lost cause, his lies were obviously intended only to rally the dregs of what's left of his (Gingrich's and Palin's) Republican base.

Not that it matters for the purposes of defeating his ignorant argument against Sotomayor, but black soldiers and sailors did fight heroically against their former slave masters at Milliken's Bend during the Battle of Vicksburg. In fact, it was the first major Civil War battle in which African-American troops were extensively involved.

Some 60 years later, African-American soldiers would shed their blood on the battle fields of Europe in the fight against the nazis. The all-black 320th Battalion, was recently honored (by France) for being among the troops that fought and died on the beaches at Normandy on D-Day.

So far I've heard nothing from Buchanan's fellow Republicans, nor from Democrats for that matter, refuting this purposeful distortion of history.
Posted by Mike Klonsky at 1:38 AM