What the "best and wisest" parents want for their own kids... [Updated*]

Back in 2011, I was taken by this open letter from Arne Duncan and his wife Karen to their two children, Claire and Ryan, on the opening of the school year. The letter, cross-posted on the DOE's Homeroom blog and Parenting.com, showed the Duncans as thoughtful and caring parents, deeply concerned about their own children's education, welfare, hopes and dreams for the future.

The letter gave us some insight into what the former Chicago schools CEO and the nation's second-term Secretary of Education thought was best when it came to public schooling.


Our hope for you this year is that you will be challenged academically. You have some terrific teachers to support you. We want your love of literature to grow, and we’ll do our part by reading to you every night. We hope you will develop critical thinking skills in math, and we promise to help you when you’re struggling and celebrate when you’re succeeding. We would like to see you engaged in learning science, civics, and history, and we will continue to explore the natural world at nature centers, museums, and many of the other great resources in the Washington area.

We also want you to enjoy so many other enriching experiences that are so important to a complete education. We know you have great music, art, and physical education teachers at your school, and we believe that these subjects are essential for a well-rounded curriculum. And so is recess. We want you to have fun!

I'm sure many of these ideas were formed from Arne's own experience as a young student at the elite University of Chicago Lab School, a place where classes are small, where the arts flourish and where standardized testing is devalued. Mayor Rahm Emanuel sends his children to Lab.

Once at the DOE, the Duncans wouldn't settle for D.C. public schools for Claire and Ryan -- not even when their favorite reformer, Michelle Rhee, became the school chancellor. Instead they bought a house across the Potomac in an upscale Arlington, Va. neighborhood where the schools are top-notch, including small class sizes and lots of dollars spent to keep them that way. 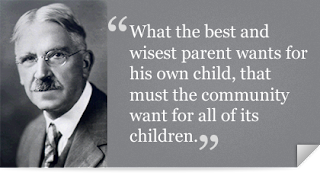 Now comes the news that during Arne's time as Chicago's school chief, the Duncans held a secret list. It included the names of clout-heavy political donors, local politicians and billionaires like Bruce Rauner, who wanted their otherwise unqualified children admitted through the back door to one of  the city's elite selective-enrollment schools. While a strict testing regimen was being implemented across the district, with arts being cut and recess banned, all the VIPs needed to do was make a phone call and either Arne or Karen would put their initials, AD or KD. next to their patron's name, and the back door to top-tier schools like Walter Payton College Prep would open wide.

Over a century ago, Lab School founder and our greatest educational philosopher John Dewey wrote in School and Society:  "What the best and wisest parent wants for his child, that must we want for all the children of the community. Anything less is unlovely, and left unchecked, destroys our democracy.”

Arne must have slept through that class at Lab.
Posted by Mike Klonsky at 6:53 AM