Divide and rule is a dangerous game 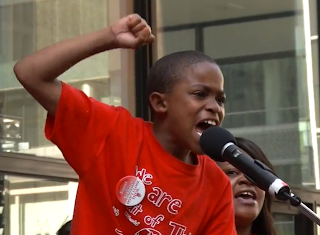 t's a desperate, dangerous games that Rahm and Byrd-Bennett are playing. As today's vote approaches the Mayor's people and CPS "insiders" are having a ball, leaking inside information to from "unnamed sources" about which schools will be closed and which will stay open in the fall.

Last night it was Elizabeth Brackett on Chicago Tonight telling us that, "my sources" say that about 10 schools will be dropped from Byrd-Bennett's death list.

The rest of the schools will have their lives and possibly the lives of their endangered students decided by a series of votes taken by Rahm's hand-picked board, David Vitale, Jesse Ruiz, Andrea Zopp, Henry Bienen, Mahalia Hines and Carlos Azcoitia. Board members are expected to take a single vote on the group of 30 schools they supposedly all agree on. Where they disagree, they will vote school by school.

The purpose of the leaks is no mystery. In a scene out of Sophie's Choice or Waiting for Superman, parents and students have been thrown into an emotional whirlwind, hoping against hope that their school will be spared or that their child will survive the dangerous walk and return home safely from a receiving school. Whole neighborhoods along with local aldermen are waiting so see if their communities will be further blighted with boarded-up buildings and a rising toll of violent crime.

I'm heading down to Clark Street this morning, along with many others, to protest and bear witness to this crime against the public good. However the vote goes, I know the story doesn't end here. Rahm's cynical divide-and-rule tactics won't derail the growing resistance movement -- new Civil Rights Movement, if you will -- that is growing not only in size, but in scope as well.


Dear Principal,
As you may have heard on the news, certain members of the CTU have openly announced their intention to commit acts of civil disobedience in response to announcements about school actions. As shown below, they are actually training their members how do do this. Read the rest here.


I hope the training goes beyond just CTU members. The rest of us will need it too over the long hot summer ahead.
Posted by Mike Klonsky at 7:05 AM