The loyal-to-whom? opposition to CORE 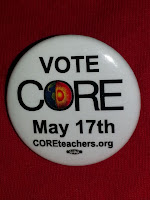 Who is Tanya Saunders-Wolfe and why is she using the pages of the anti-union Chicago Tribune to say all these terrible things about Karen Lewis and her hard-charging CORE Caucus, currently leading the CTU?  Answer: I don't have the faintest idea. The reason I don't is, I'm not a union insider. But I do know that I haven't seen her at any of the dozens of citywide events, hearings or protests against school closings, where Karen Lewis was speaking out and forging alliances with parents and community groups.

When thousands of CTU teachers were on strike, fighting for their very survival, Saunders-Wolfe and her "Coalition to Save Our Union" were nearly invisible even though they were invited in to be part the negotiating team by Lewis and her CORE Caucus, who were out in front of the struggle.

Now, suddenly her name is appearing in carefully-planted stories in the Tribune where she is being promoted as the friendly alternative to the "bomb throwing" Lewis in the May 17th union elections.

The truth is that Saunders-Wolfe and her coalition are part of an unprincipled alliance of old-line union sell-outs and even some disgruntled former progressives, who otherwise hate each other and  who were run out of leadership in years past. Now this unseemly alliance is being propped up with lots of money coming from outside sources. One can only guess who's footing the bill for a string of upcoming TV ads blaming the union for school closings and for the wave of teacher bashing and assaults of public employees.


I'm actually glad the two sides will be debating the best direction for the union, in front of the membership. That goes to the heart of union democracy. I also feel confident about the ability of Chicago teachers to figure things out for themselves and decide who should lead them through the difficult struggles ahead.

*****
On a more positive note, hundreds of teachers and staff at UNO charter schools have voted to join the union. Today's Sun-Times reports: