Picnic in the park 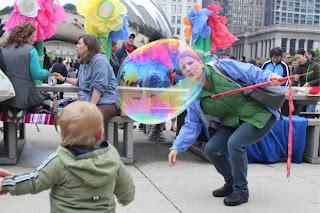 Sadly, I missed yesterday's school-closing protest picnic in Millennium Park. Despite the rain, it looked like great fun. I was still recovering from 70th birthday celebrations. Old rocking chair's got me.

ABC News also picked it up.

Chicago Grid has an interview this morning with CFL Pres. Jorge Ramirez who says that so-called pension reform is keeping him up at night. I hope so.


“There’s going to be critics of what’s been put out there…. There’s a great likelihood that there will be lawsuits. But our mission is clear. How we got here is clear. Workers were the only ones that never missed a payment and did everything they were ever asked to do. It’s very simple for us. We’re supposed to fight to maintain those pensions.”

Let's hope he and the union leadership take themselves seriously and mean it. Their support for Cullerton's pension-busting bill SB2404 says they don't. There's less than a week left to go in Illinois' spring legislative session and it's once again doubtful that anything significant will happen.

According to a Reuters report:


The Illinois legislature, which over decades has built up a $100 billion unfunded pension liability, now is a study in gridlock. Speaker of the House Michael Madigan and Senate President John Cullerton each are pushing competing versions of a fix and each refuses to take action on the other lawmaker's bill.

A fight among thieves.

I love it that 9-year-old Asean Johnson is still all over the national news since delivering his stem-winder speech at last weeks protest rally. The 4th-grade student at Marcus Garvey Elementary has become a symbol of the new civil rights movement against the mass school closings in Chicago's black community.

I'm still amazed over NEA Prez Van Roekel's  comments about Rahm's school closings plan. VR compares the Mayor's so-called "safe passage" plan for kids moving to their new receiving schools, to the dangerous path "Palestinians have to travel from the West Bank to the Gaza Strip." I think it's a pretty apt analogy. But will the union bureaucracy really allow that kind of talk while they are bending over frontward and backward to keep their seat at the table?

Stay tuned.
Posted by Mike Klonsky at 8:31 AM