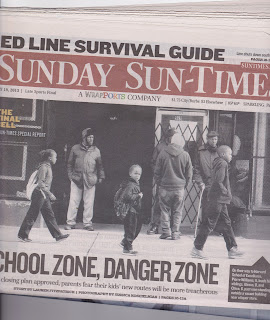 Was that our mayor last seen trapped in a glass-encased parking meter box and dangled from a crane over the goby-infested waters of Burnham Harbor with hordes of Chicago public school parents threatening to tip the crane?
-- Sun-Times columnist Mark Brown


Poor Rahm. He can't even catch a break from his own pals at the Sun-Times. Check it out. Sunday's editorial headline reads: Editorial: The hollow promise of a better school.


Did Schools CEO Barbara Byrd-Bennett consider all this before deciding to close Manierre, along with 53 other schools that CPS says are under-enrolled? To be fair, she likely considered much of it, but her team nonetheless concluded that students would be better off at Jenner, and that the savings from closing an underused school justified the decision. The school board votes on all closings Wednesday.

We aren’t buying it. Manierre and Jenner students will be worse off in one school. 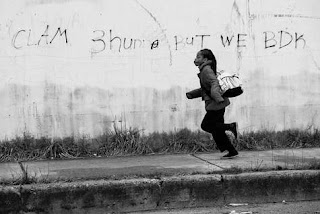 Then there's these stark photos depicting the dangerous route that kids from Yale Elementary in Englewood, will have to take to get to their receiving school in one piece.  The photo montage accompanies "SPECIAL REPORT: CPS closings create school danger zone" which includes this, from a Yale parent:

If anything happens to a single child who has to travel farther to get to Harvard, [Yale parent] Carr knows whom she will blame: Mayor Rahm Emanuel. Heaven help him if it’s Jaleel.

Another front page Special Report this morning has this headline:


SPECIAL REPORT: If Marconi closes, students will have to walk past drug dealers on way to Tilton

We've watched as the mayor's poll ratings, especially among the city's black and low-income voters has sunk like a stone. But is Rahm quickly losing credibility and falling out of favor with the very rich and powerful forces that put him in in the first place? Is he now vulnerable in the next election? Is he becoming a liability to the Democratic Party nationally in the next election cycle?

You bet. All of the above.
Posted by Mike Klonsky at 6:16 AM