Graduation rates up in Chicago -- Great, if true

If it's true, I'm elated to hear that graduation rates have improved in Chicago. It's a tribute to the hard-working CPS teachers, principals and parents, who are currently being debased by the administration and in the media. It also indicates that public schools are not "failing" after all.


Chicago Public Schools announced Saturday that more than 60 percent of their 2007-2008 freshmen graduated last year, calling it a history-making record.  The current administration has only been in place for a year and therefore can take no credit for the increase in graduation rates. -- Catalyst 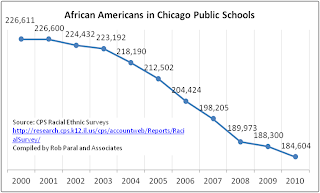 My problem with the numbers I see is that there's no analysis attached. I worry, for example, that the improvements may also reflect the changing demographics of the city. Here I'm thinking of how some school reformers cheered when test scores rose in New Orleans after thousands of poor and black students left the system in the wake of Hurricane Katrina. You remember Katrina, don't you Arne Duncan?

What I would like to see is a school-by-school breakout of these numbers as well as some analysis of the widening or narrowing gap between white, Latino and black students.  I also want to follow the trail over the next few years to see what impact the longer school day and  mass school closings have on graduation rates and measurable learning outcomes.

Actually, closing schools and support services in already under-resourced black communities may produce a rise in test scores and a lowering of dropout rates as thousands of poor families are driven out of the city and replaced by middle class and professional families whose kids will attend selective enrollment or charter schools.

A few other things...

2. BTW, that guy with the badge in the waiting room is about to serve you with yet another suit filed by the CTU against the school closings. Looks like a long, hot summer ahead.
3.  Please tell your Liar-in-Chief Becky Carroll to start humming a different tune. Nobody's buying her one-note mantra that the “union leadership remains committed to a status quo." It just gets old and stale.
Posted by Mike Klonsky at 12:54 PM