A Chicago Tribune/WGN poll just out shows nearly 60% of Chicago voters disapprove of Emanuel's school closing policies. Those numbers closely mirror negative feelings about Emanuel's approach to public education, which he has labeled a top priority. The general dissatisfaction was even greater among those with children in public schools — three-fourths disapproved. 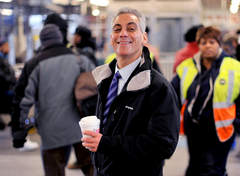 In the minds of many Chicagoans, tough-talking Little Emperor Rahm is proving himself to be little more than a windbag and a corporate toady. He's like my old dog Bogart who barked loudly but shat near the house.

His "get-tough" approach with Parking Meters LLC was rejected by the City Council when it was discovered that it would actually add millions more to the hated LLC's bottom line instead of curbing their greedy grab of citizens' dollars . The same with his phony negotiations with the Cub-owning Ricketts' who are the Bain Capital of baseball sports team buyers.

Worse to the voters  is his moving forward with his  massive school-closing debacle, despite overwhelming opposition from the community. In other words, when the the Civic Committee tells Rahm to jump, the self-proclaimed "new sheriff in town" jumps, public opinion be damned.

Throw in the daily reports of neighborhood gun violence, increasing as the weather warms, the great UNO charter scandal, and the neutering of the IG, and the result is, Rahm's poll ratings are sinking like a stone and rapidly eroding his support in the black community. Even the Tribune's Eric Zorn is now talking about the Rahm's vulnerability in the next election. Of course Zorn puts such a negative spin on it (calling possible candidate Karen Lewis "bombastic" -- at least he didn't say "bomb-thrower") readers are left thinking that a closely contested  mayor's race is only possible if the world is on the brink of destruction in 2015.

I'm not so sure. I think Rahm can be had and I'm hearing lots of rumblings from community groups who agree. Will a viable opposition candidate emerge from ongoing meetings? I hope so.
Posted by Mike Klonsky at 12:22 PM

Email ThisBlogThis!Share to TwitterShare to FacebookShare to Pinterest
Labels: RAHM