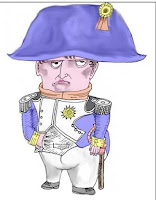 Friday, May 17th marked another dark day for Emperor Rahm and his patrons. Karen Lewis and her CORE Caucus  have emerged victorious in a landslide victory (80%) over the Rahm/CPS-backed Whatsername Caucus (Sorry but their names still escape me).

Lewis and the CTU have been leading the charge against the mayor's massive school closing plan and have organized a 3-Day March of thousands, starting tomorrow.

The two civil rights suits filed by the union on Wednesday, along with today's revolt by the Council's black aldermen, plus a swift kick in the ass yesterday by Toni Prekwinkle, has a battered Rahm retreating on school closings like the little Napoleon he is. But as the Board vote on the closings draws near, the Sun-Times is reporting that some of the 53 Chicago Public Schools targeted for closing could be dropped from the list before Wednesday.

Remember, it was just a week ago, after a group of Rahm-appointed judges rejected the mass closing plan and named 13 schools they wanted left open, that Rahm nixed the idea and said he would make no compromises or negotiate any further.

But today the City Council’s Black Caucus demanded that the Mayor and his handpicked school board follow the judges' recommendations. To do otherwise, Ald. Howard Brookins (21st) claimed, would be to “render the whole proceeding a joke” when Emanuel is the one who set it up.

The funniest S-T quotes come from "unnamed sources" who try and convince reporters Spielman and Fitpatrick that Rahm's backtracking has nothing to do with the Black Caucus revolt or with Preckwinkle. Then there's CPS Liar-in-Chief Becky Carroll who "wouldn’t confirm or deny the predictions, calling them rumors. "

I will confirm them.
Posted by Mike Klonsky at 10:16 PM