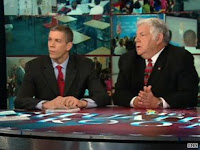 Some of you might remember Bennett as Ronald Reagan's education secretary. Younger readers may know him more as the gambling-addicted pontificator who wrote his preachy Book of Virtue, or the racist buffoon who liked to tell jokes genocide jokes, like: "[Y]ou could abort every black baby in this country, and your crime rate would go down."

Sorry Bill. Maybe you thought we forgot and put all that behind us. I haven't.

This is Duncan's version of bipartisanship. After all, the Democrat and the neocon found lots of areas of agreement. Bennett lauded Duncan for supporting the mass teacher firings in Central Falls. They both agreed that No Child Left Behind had been responsible for "lowering standards."

Hey wait a minute! Wasn't it Duncan who praised NCLB to the skies when he was Chicago schools CEO and put the district of a strict standardized testing regimen? And wasn't it Obama, just the other day, who was toasting Duncan's predecessor, Margaret ("NCLB is 99.4% pure") Spellings, as the reform leader who "helped to lead a lot of the improvement that’s been taking place and we’re building on"? Building on, indeed.

And wasn't Bennett previously a big cheer leader for NCLB, especially when his company, K12 Inc., was making millions after it somehow qualified as an NCLB "supplemental educational services" provider, giving Bennett access to huge NCLB grants. As I recall, one of K12's biggest customers at the time was Arne Duncan himself. Duncan and the board even granted K12's virtual school a charter and access to millions in state funding, without making the company go through the normal chartering procedures.

Oh, one more thing they were both certain of--Duncan's new mantra: "This is the civil rights issue of our generation."

I agree with one point Duncan made near the end of his interview.

"We have to stop lying," Duncan added.