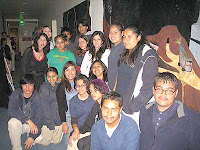 Interview with a Green Dot Animo Justice student and a teacher

I spoke with a teacher and a student from Green Dot's Animo Justice Charter High School, to gather material for a larger piece I'm working on. Green Dot founder, Steve Barr, had earlier told me that the school has been marked for closing by Green Dot's board of directors, on recommendation from the management team, on grounds that it's not cost effective to run the school with 450 students and that the school has been the "lowest performer" among a cohort of Green Dot schools.. The announcement has led to ongoing student protests and an angry response from parents.

Ismael is a 17 year-old senior at Animo Justice and vice-president of the senior class. He's on his way to college in the fall and doesn't have to worry about where he will attend high school next year. But he still sounds angry and frustrated about the closing of his school and was a participant in the student sit-in.


"I was one of the students who built this school from the beginning. I felt like it was my school," Ismael said. "They should have consulted with us and our parents and not just told us they were closing our school. If they told us earlier, maybe we could have come up with some alternatives."

On of the things that angered Ismael the most was that, "the CEO didn't even come to tell us face-to-face, but sent someone else to tell us the school was closing."

When I asked Ismael his thoughts on Animo Justice's "low performance." He responded with praise for Green Dot's teachers and pointed out that the school had been moved three times in three years and had a string of principals. "It's true that our scores should be better, but we aren't a bad school. We could improve if we were given the support we need."

One of Ismael's favorites is science teacher Judy Riemenschneider, who is in her third year at the school. Judy told me that she chose to teach at Green Dot because she wanted a small-school environment, teachers being involved in decision-making, and a union contract. But like Ismael, she was dismayed at the lack of consultation with teachers, parents and students over the decision to close Animo Justice.


"The biggest issue for me was lack of input by teachers, parents and teachers on the decision to close the school. Green Dot says that we are critical to the decision making process. But things don’t happen overnight. By involving people in advance we could have worked to resolve the situation."

While students and teachers have been told they will all be placed at other Green Dot schools, Riemenschneider is not so sure:

"Animo students are guaranteed a spot. There’s a process in place. But they’re laying off teachers from Locke [Green Dot's other cohort]. They’re going to lose some teachers. We'll all be notified on April first who will be lay-ed off and who will stay. So to say that we will all have jobs is somewhat misleading."

When I asked her about the school's dwindling enrollment and lagging performance, she responded:


"We came together. We built the school. But how can a school stay enrolled if you move around so much and have 3 principals in three years? And with all that instability, how do you make an accurate assessment of the school's progress?"

She pointed out that Animo Justice was now competing for students with a rapidly multiplying group of charters. There are now six others in the neighborhood around Jefferson High.

"But I’m passionate about this community we've built. It's hard to lose something you were so involved and invested in," she said.
Posted by Mike Klonsky at 7:22 AM