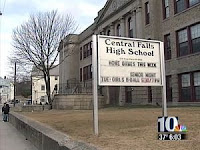 According to this morning's Times, it looks like Supt. Gallo and the Central Falls board are in retreat. After first refusing to even meet with the union, Gallo announced yesterday that she welcomes the union’s input on a transformation plan for the high school. Gallo, said an offer made late Tuesday by the Central Falls Teachers Union gave her hope the issue could be resolved without mass firings. The union has already appealed the firings to the district’s board of trustees and filed a complaint with the State Labor Relations Board and national reaction, especially from labor, to the mass firings has been overwhelmingly negative towards the district and state leadership as well as towards Obama/Duncan.

Questions remaining:
Stay tuned.
Posted by Mike Klonsky at 8:10 AM