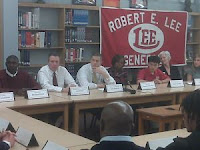 It seems like everyone in school reform is talking the civil rights talk these days. "Education is the civil rights issue of our time" has become the mantra of the so-called "post racial" era. I suppose that's a good thing but it makes me wonder if it's become an empty cliche? I can't help remembering that 8 years of No Child Left Behind have been foisted on us, using that same civil rights lingo along with the empty promise of "closing the achievement gap."

Yesterday, Sec. Duncan announced that the DOE's Office for Civil Rights expects to issue a series of guidance letters to educators to address "issues of fairness and equity." According to the Washington Post, the OCR "is ramping up enforcement of civil rights laws in schools and colleges, a move that seeks to draw a contrast with the policies of his Republican predecessors."

Duncan made the announcement at an appearance at the Edmund Pettus Bridge in Selma, Alabama, where Dr. King and civil rights marchers were attacked by state and local police in March 1965. There he listed a few examples of the widening racial gaps, including suspension and expulsion rates, in schools.

It's interesting to note that Duncan also held a news conference at Robt. E. Lee High School, a long-standing symbol of white supremacy and of Montgomery's war against the Civil Rights Movement of the '60s. It still strikes me as shocking that in 2010, we have a now, predominantly African-American high school in the South named after a pro-slavery general and leader of the Confederacy. After some protests by black ministers and politicians, the ever-agile Duncan announced he would visit Martin Luther King Elementary School as well--a kind of hat-tipping to both sides, I suppose.

I'm glad Duncan went to Selma. I hope his appearance was more than a photo op or just political another example of political positioning vis a vis the Republicans. Of course even old-line Georgia segregationist Newt Gingrich, Duncan's touring buddy, is talking civil-rights these days, in order to push school vouchers and privatization schemes. So if I sound a little skeptical, I am. Here's why.

When Duncan was Chicago's schools CEO, he led the charge to liquidate the district's court-ordered desegregation plan. "We've done all we can do," Duncan pleaded before a federal judge. He claimed that the push to desegregate the city's schools was going to cost the district $300 million. The Consent Decree was dropped and Mayor Daley's school system remains, arguably the most racially segregated in the nation.

Ron Huberman, Duncan's replacement, is now saddled with the task of restructuring the district's highly esteemed magnet schools, minus deseg requirements and without the ability to use race as an admissions criteria. In other words, the very schools that were created under the Civil Rights Act, and the city's only racially diverse schools, are now being re-segregated.

As was pointed out in a Sun-Times editorial yesterday, Huberman's initiative "--one that no longer uses race as a factor, per a court ruling -- almost certainly makes it harder for minority students to get in."

Such is Duncan's civil rights legacy in Chicago.
Posted by Mike Klonsky at 6:21 AM