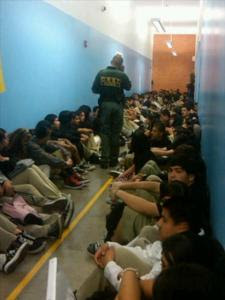 Green Dot founder Steve Barr originally offered some hope to a struggling L.A. community. He promised a viable alternative to the large, under-resourced, often violent, traditional neighborhood high schools, run by an incompetent, demoralized, stultifying bureaucracy. He also promised that Green Dot, unlike the dozens of other market-driven, privately-managed charter school chains, currently favored under Duncan's Race To The Top reform strategy, would empower teachers and respect their rights, codified in a new, model, union contract.

But this morning, it is clear to hundreds of students, teachers and parents who bought into Barr's promise, that Green Dot is no different and in many ways worse, than any of the other of the new breed of privateer charter school operators who trade in the hopes and dreams of children and their parents for a better future.

Green Dot's money man Marco Petruzzi announced yesterday that the company's Amino "Justice" School is closing and that its students and teachers will be dispersed around the city. To Petruzzi & Co., it was strictly a bottom-line decision. The school wasn't making its enrollment quotas and despite tens of millions in corporate donations as well as huge Broad and Gates Foundation grants, it was running at a deficit. Rather than carry it as a loss-leader, Green Dot's unelected, unaccountable corporate board decided not to throw good money after bad.

The announcement sparked a sit-in by some 400 Amino students and outrage from parents and teachers.

"We had no idea that closing was even a possibility, and then we received the information on Friday morning," said Judy Riemenschneider, who teaches chemistry and environmental science. The ultimatum is at odds with Green Dot's principles, which call for teacher input into critical decisions, she said.

Animo Justice senior class president Eduardo Campos, 17, credits the school for his ambition to graduate and go to college and also for developing student leadership skills. "We built the school from scratch," Campos said. "We chose the name of the school and the colors. And now all of that is being taken away." (L.A. Times)