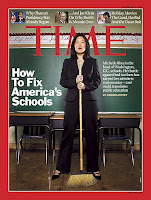 Rhee drew extensive criticism for appearing on the cover of Time magazine in late 2008 with a broomstick to symbolize her attempts to overhaul the school system. She touched off a four-day furor this year when she told Fast Company magazine that an unspecified number of the 266 District public school teachers fired in October had had sex with students or been suspended for administering corporal punishment. (Washington Post)