We need an independent People's Task Force in Chicago

I'm all for the call by A.G. Lisa Madigan,  for a federal civil rights investigation of the Chicago PD and City Hall's ongoing cover-up of recent police killings. I'm glad to see that the call to bring in the feds is gaining broad support, including most recently from a group of retired African-American police officers and from (get this) Hillary Clinton.

The mayor's proposed Task Force is a farce and its members should be ashamed to have agreed to take part in this charade.

Even a federal investigation is not adequate. While Obama's Justice Dept. has stepped up investigations of big-city police departments -- at least, compared to Bush's DOJ -- results have been too slow in coming and there's little or no transparency in the process. 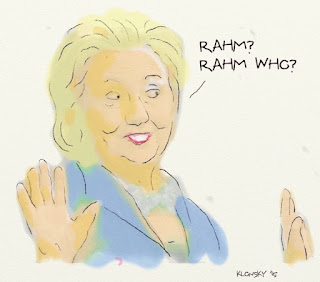 The current ongoing federal investigation in Chicago of the Laquan McDonald murder has even been used by Anita Alvarez and Rahm Emanuel as an excuse for not releasing the video of the shooting. And for not telling us that officer Jason Van Dyke, had been accused of misconduct 18 times before he killed Laquan.

Plus, the feds have spent months in Ferguson as well as in Chicago, investigating civil rights violations and corruption, only to come back with politically expedient band-aid solutions, and empty reports leading to little or no change.

Alongside the Justice Dept. investigation, we need an independent People's Task Force that is representative of the community. One that includes community groups, black and Latino youth activists, progressive pols, parents, women and LGBT groups, victims of police brutality and mistreatment, teachers and community elders. Expert witnesses, journalists, academics, victims of police brutality, and even members of the CPD should be called to testify and tell their stories.

Findings should be summed up in a report to the public and in media reports with a list of demands and recommendations for community action.

Who could call together such a Task Force? How about it, Black Caucus and Progressive Caucus of the City Council, together with the city's labor coalition?

Without an independent People's Task Force, we will once again be relegated to spectator status and be fed (no pun intended) a little to hide a lot.

Oh, and while we're at it...How about a truly independent Police Review Authority to replace the look-the-other-way IPRA? The N.A.A.C.P. issued the following statement this week:


“The Independent Police Review Authority, (IPRA) was created to be an independent agency that investigates police shootings and misconduct cases. Currently, this process isn’t truly independent because cases are sent back to Chicago Police Department to approve. The process needs to provide IPRA with true independent authority with referral rights to an independent prosecutor.”

More on that later.

No more fun and games.