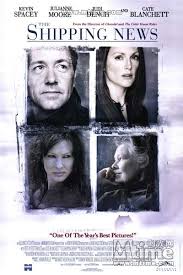 I watched an old film, "The Shipping News" the other night. I liked it, mainly because it's set on the wild, stormy, Newfoundland coast and stars Kevin Spacey, one of my favorites. One scene that grabbed me, had newsman Quoyle, played by Spacey, an inexperienced sailor out in an unworthy boat in rough waters, bailing furiously while the sea overtakes and sinks his sorry craft... (I'll stop here, in case you haven't see it).

That image stays with me as I'm following (and telling) the story of the equally unworthy craft, the leaky Rahm Emanuel regime in the midst of another stormy scandal. Only Rahm (a terrible actor) is in the sinking boat with a crew of thieves and scalawags. Among them, his indicted schools chief Barbara Byrd-Bennett, police Supt. Garry McCarthy and State's Atty. Anita Alvarez. As the story unfolds, Rahm is faced with the choice of throwing some of the dead weight overboard or going down with the ship.

But no matter how hard he bails, it's the rotting, fabric of the regime that's sinking him. And each of his hand-picked crew that gets tossed, only reveals the depths of the problem.

Rahm didn't hire Alvarez. Like him, she was elected and therefore not so easy to dump, even after her betraying of the public trust in her mishandling of the 16-shot, racist police execution of 17-year-old Laquan McDonald. So many questions still remain. But she pretty much sealed her fate last week when she stood before the media and assured the public that cops hadn't erased the tapes from the Burger King cameras, showing officer Van Dyke pumping more than a dozen rounds into the bleeding body of McDonald. The tape may well not have been erased. I can't imagine the missing 86-minutes could show anything more damning they the mysteriously-soundless video that Alvarez and Rahm were finally forced to release.

But anything is possible with this group of scoundrels. Case in point: The city is sitting on another damning video of a cop shooting an unarmed black man, Ronald Johnson. This seems to be Rahm/Alvarez M.O.

Yesterday, reporter Carol Marin showed actual pictures of  street cops sitting at the BK computer going through the tapes. Why?

Alvarez may be forced to resign before my choice, Kim Foxx, gets a shot at her in the upcoming election. I would rather see her go out that way so that Foxx is the people's choice. But either way, it's all good.

McCarthy swears he's staying and that Rahm "has my back". He obviously doesn't know Rahm very well. Ask Byrd-Bennett.