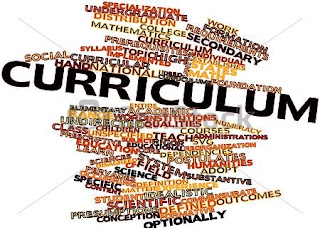 Abandon the notion of subject-matter as something fixed and ready-made in itself, outside the child's experience. -- John Dewey

Remember back a couple of years ago when Common Core critics were being raked over the coals by Arne Duncan, Peter Cunningham and others for calling CCSS a curriculum?


The Common Core has become a rallying cry for fringe groups that claim it is a scheme for the federal government to usurp state and local control of what students learn. An op-ed in the New York Times called the Common Core “a radical curriculum.” It is neither radical nor a curriculum. … When the critics can’t persuade you that the Common Core is a curriculum, they make even more outlandish claims.

"It's not a curriculum," they scolded. "It's merely standards." Such a dichotomy! Supposedly, Common Core wouldn't tell schools what, when, or how to teach. Rather, it would only create performance goals and, of course, the battery of tests to go with them.

Well, Duncan was right about Common Core not being "radical." But Common Core sure as hell is curricular. If not, why, for example is there something called Common Core algebra as opposed to just algebra? Or Common Core U.S. History?


Standards are set at the state level and define learning goals. Curriculum is the actual content that is taught and is usually chosen and developed at the local level, often by the teachers themselves.

Let's leave aside, for a moment at least, the question of whether or not teachers have the power to decide curriculum, and get to Cunningham's main point -- the supposed wall between standards and curriculum.

Bureaucratic non-educators like Duncan and Cunningham don't know a curriculum from a corral. They look at it as simply a technical process.

But curriculum encompasses the entire process and content of teaching/learning. It defines the educational foundations, the experience of the child and teacher, goals and contents, their sequencing in relation to the amount of time available for the learning experiences, the learning environment inside and outside of the classroom, the methods to be used, the resources for learning and teaching (e.g., textbooks and new technologies), evaluation and more.

Fast forward to today... EdWeek reports that Algebra 1 is a much tougher course under the Common Core and that students are now being introduced to algebraic concepts earlier in middle school. As a result, Algebra has become more of a gate-keeper and sorting mechanism than it already was. In New York, this puts even more students in peril of not graduating or going to college, widening the already vast chasm between students from affluent households, and poor, black, Latino and white students.

The percentage of N.Y. students who passed the test this year dropped precipitously: Just 63% of test-takers passed the common-core-aligned exam. That was down from 72% who passed the previous year's "Integrated Algebra" test.

That's thousands of kids who won't be able to graduate high school on time.

Why should Algebra be the gate-keeper as opposed to science, social-studies, or the arts? Who decides what's most worthwhile for all students to learn? Answer: Under Common Core, now re-ratified under the new Every Student Succeeds Act (ESSA) signed by President Obama this month, it's still not educators who decide -- despite Cunningham's claim.


Common-core implementation has been fraught in New York. Many teachers denounced the speed with which they were expected to shift to the new standards, saying they lacked sufficient training and resources.

True, some authority has been shifted from the D.O.E. to the states -- an admission that the feds had overplayed their role under Duncan's regime -- but what is tested, either by the states or the feds, is still what's being taught.

ESSA supporters, including the AFT and NEA leadership, say the new law gives states the right to reject the standards, which they say should help end any controversy over top-down control.

But is giving more power to Mississippi or Alabama pols over curricular decisions a good thing? Not in my mind. And besides, despite claims by Republicans like ESSA co-author Sen. Lamar Alexander, that the new law gets rid of Common Core, it's just not true.

No, under the ESSA, the U.S. Department of Education retains regulatory powers, including the final say on how and when states determine schools are low-performing. The law also maintains annual testing requirements for grades 3-8 and in high school. And it will still be the giant textbook and testing companies who have the real power in driving curriculum.