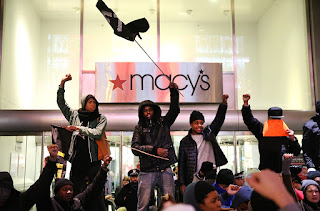 CHICAGO — It was strange to watch Mayor Rahm Emanuel’s hands tremble behind the podium as he talked to reporters about his new task force aimed at improving accountability in a police department that a lot of Chicagoans don’t trust. -- Mark Konkol at DNAInfo

While Rahm trembles, all the national news shows this a.m. began with the story of his  possible departure. But the Little Emperor tells Natasha Koreki at Politico, he's staying, like a good captain, ready to go down with the ship come election time. I'm wondering what the other ship officers, like his big-money campaign patrons, think about those prospects? They've invested a lot in Rahm and stand to lose a lot when the ship sinks.

Mayor Rahm Emanuel demonstrated a willful ignorance... All along, Mr. Emanuel’s response, either by design or because of negligence, was to do as little as possible — until the furor caused by the release of the video forced his hand. The residents of Chicago will have to decide whether that counts as taking responsibility.

They're right. We will.

One thing I know for sure. Rahm isn't leaving for Paris as planned or anytime soon. If he's read his history, he knows that coups d'etat happen happen most when the emperor is out of town. Beware the Ides of December.

Another thing I know is that Rahm's newly-formed, so-called, Task Force on Police Accountability, is a farce and those who accepted appointments to it have now made themselves complicit in the cover-up the mayor is perpetrating. They are all insiders, including:

• Lori Lightfoot, president of the Chicago Police Board and a former federal prosecutor

• Randolph Stone, director of the University of Chicago's Criminal and Juvenile Justice Project Clinic and a former public defender

"We've seen the mayor put together a hand-selected task force, and then they come out with a very managed result," said freshman Ald. Carlos Ramirez-Rosa, 35th. "Now is not the time to have more closed-door conversations."

"Someone who has been involved in this kind of litigation and fighting these issues over decades should be involved," said veteran Chicago civil rights attorney Flint Taylor. "I think this commission should have representatives from Black Lives Matter, Black Youth Project 100 and We Charge Genocide. They are the young people who most represent the people who are getting shot and getting beaten."

PCP??...I can't let go of the way even the best news people (like Phil Kadner) keep reporting that Laquan McDonald was high on PCP when he was executed by officer Van Dyke. Didn't any of them read the medical examiner's toxicology report? It shows clearly that NO DRUGS were found in Laquan's body during the autopsy. Some, like ABC News7's Ben Bradley, tweeted me that there was another report showing the PCP. But if there is such a report, where is it? Who did it and why?

I'm pretty sure the PCP issue will be used by Van Dyke's defense lawyers to show the killer's state of mind when he pumped 16 shots into Laquan's body. There must be one reporter out there who can shine a light on this one. 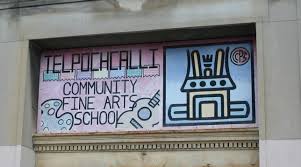 MORE SCHOOL CLOSINGS...While everyone has their eyes focused on the McCarthy firing and the video cover-up story, Rahm and Claypool are quietly planning more school closings and consolidations. Wake up people!

I've particularly got my eye on the planned move of Spry's Community Links High School into the same building as Saucedo and Telpochcalli in Little Village.

CPS is proposing to move Spry’s high school one grade at a time over the next three years. Currently the high school is split between the building it shares with Spry Elementary and a leased space in an adjacent Boys & Girls Club building. CPS officials say the co-location would allow CPS to end the lease and save money -- about $90,000 a year.

But the plans came as a surprise to some staff at the schools.

“This is news to my knowledge,” says Maria Cosme, a school counselor at Telpochcalli. “We do not understand why.” 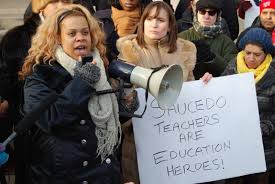 There's always winners and losers in these consolidations and building sharing schemes. Telpochcalli, a nationally recognized small, dual language, arts-focused school. It is one of the last of the original teacher-led small schools to survive the destruction of Chicago's once-potent small schools movement. Looks like they're coming after it again.

Saucedo teachers and parents organized the first of the citywide opt-outs of the PARCC exams. Could this be pay-back?

And why? To save $90,000. Why not save it by getting get rid of half an area chief and leave the schools alone?

A community meeting is planned for this evening to organize a response. I'll be there.