Diagnosing Rahm Emanuel: Does he have 'affluenza'? 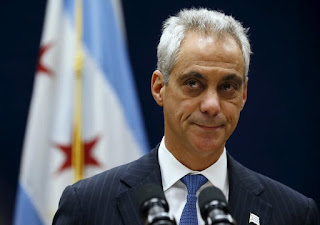 No citizen is a second-class citizen in the city of Chicago. If my children are treated one way, every child is treated the same way. -- Rahm's tearful apologia

Don Rose, a long-time activist/critic/observer of the Chicago political scene, thinks Rahm Emanuel is suffering from some kind of learning disability.


I’m not saying he is dumb, but rather what we used to call a “slow learner.” He just doesn’t get things as quickly and easily as most folks. It’s also possible that he suffers from the fashionable malady called adult attention deficit hyperactivity disorder (ADHD)–though I’m not qualified to make a clinical diagnosis.

Instead of condemning Emanuel, perhaps he deserves our compassion and pity as a slow learner and possible ADHD patient. At least until our record-breaking property tax bills come due later next year.

Of course, he's making light of Rahm's sudden discovery that young African-Americans may be treated differently by the police than he is or than his children are. Or that there is a "code of silence." Eureka!

It was actually Greg Hinz at Crain's who first used the term "slow learners" to describe Rahm and his CPS crew back in 2013.


Faced with a whopping budget hole, the CPS crew has climbed into its cocoon, donned the secrecy cloak and gone out of its way to offend the very folks it needs at a time of economic distress: parents. Some folks, I guess, are just slow learners.

I don't happen to agree Greg or with my friend Don. Rahm is neither "dumb" nor a "slow learner." He's just learnt different things growing up over there in Winnetka.

My doctorate is in the field of curriculum, so I'm no clinical ed psychologist. But I'm not even sure there's any authentic diagnosis as ADHD (Attention Deficit Hyperactivity Disorder) when it comes to teaching/learning. I know the term is thrown around in schools as a broad classification for children who quickly lose interest or who are bored or rebellious (most likely me and you at times). If there is such a disease or disability, it is currently diagnosed so subjectively, with different measures of behavior used to make the diagnosis in different areas, that it's of little use and can even be damaging to children.

If I'm right, it still begs Don's question: What's wrong with the mayor? Why does he act like he's just discovered (rather than having actively covered up) racial inequality, police malfeasance, and the "code of silence" in the recent wave of police shootings?

Also worth considering is the case of Ethan Couch, the Texas teen who pleaded "affluenza" in his vehicular homicide trial before escaping with his wealthy mom to Cuba Mexico. If Couch's plea holds up, perhaps Rahm can use the affluenza defense as well.

Anyone suffering from affluenza, RWMED or LED should, at minimum, take a medical leave or simply resign from all positions of power before he is tossed out.