Still no justice for Freddie Gray 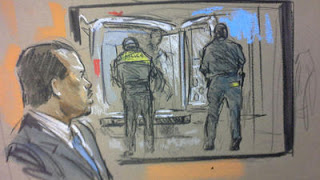 At Gilmor Homes, where Gray was arrested, Jazmin Hollaway, 20, sat crossed-legged on the ground in front of a mural of Gray. "I'm stunned. I'm speechless," she said. "When are we going to get justice?" --  Baltimore Sun

My god! They couldn't even convict a Baltimore cop of second-degree assault, reckless endangerment or even "misconduct", let along manslaughter, in the killing of Freddie Gray.  I'm not sure why they tried black cop William Porter first. He wasn't one of the cops who loaded Gray into the van, shackled, with no seat belts and then bounced him around in that steel box on one of BPD's infamous "rough rides" until he died. But he was most certainly part of the cover-up that followed. I suppose they thought they could force Porter to break the "code of silence" and make him testify in the next trial against van driver and supervising cop Caesar Goodson.

There's one thing of which I am certain. This is not over. The struggle for justice for Freddie Gray continues.
Posted by Mike Klonsky at 6:24 AM

Email ThisBlogThis!Share to TwitterShare to FacebookShare to Pinterest
Labels: Baltimore