Anyone buying Rahm's 'I'm sorry' (for whatever) speech? 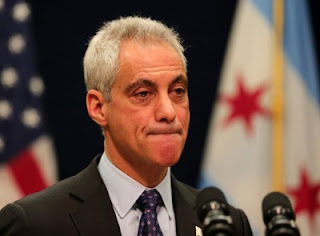 “No citizen is a second-class citizen in the city of Chicago. If my children are treated one way, every child is treated the same way. There is one standard for our young men.”

Aside from a handful of Rahm's puppy-dog aldermen, I'm not sure who's buying his sorry-for-whatever speech.

One standard for Rahm's children and every child? Really? Tell that to the kids whose schools have been closed across the south and west sides, while Rahm's kids attend the chi-chi, progressive Lab School, free from dad's test-and-punish school reform.

The mostly young protesters in the streets yesterday, certainly weren't buying it. And for good reason. Rahm's not expressing sorrow for anything he's done. He's "sorry" -- no, outraged -- at the sins of others. After all, said the mayor, I was just "following a time-honored practice" which in this case, "you could clearly say we were adding to the suspicion and distrust.”

According to S-T's Fran Spielman:


The cathartic speech before aldermen, who offered their own apology, did nothing to silence demands for Emanuel’s resignation.

More than 51% of likely voters now say he should resign,

At least one alderman wasn't buying it. Ald. Scott Waguespack (32nd) said the mayor’s rare show of emotion was more calculated than heartfelt.


“He had 400 days to work on that emotion and show that he was serious and he did nothing. They made sure they pushed this thing aside as long as they could. It took a court order to basically open this whole thing up for what it is,” Waguespack said.

Ousted police chief Garry McCarthy was having none of Rahm's scapegoating. He fired back that it was he who came to Rahm with a plan to clean up the CPD a year ago only to have the mayor sink it.

Several city sources told DNAinfo that McCarthy was upset because he had believed Rahm's attorney, Patton [who btw, lives in Evanston, not in Chicago - m.k.] was involved in blocking his effort to bring real reform to the department which turned it into “absolutely nothing … a bag of s---.”

As Brother Fred says: "Put ’em all in separate rooms and see who rolls on the other one first."

Rahm's speech reminded me of when he "apologized" back in 2013, for Police Commander Burge's police torture, without any mention of his own authorized black site at Homan Square or the many Burge victims still remaining in prison.

According to attorney Flint Taylor, Chicago taxpayers have now paid more than $20 million in “pinstripe patronage” to private lawyers to defend Burge, former Mayor Daley (who looked the other way) and the City of Chicago, approximately $65 million in settlements to eighteen of the 120 known African-American victims of Burge-related torture and more than $500,000 to Burge in pension money.

SORRY WON'T GET IT...It won't get back the money or return the lives and lost years in prison to the torture victims.

But silly me was hoping for at least a tiny I'm sorry for Chicago's infamous stop-and-frisk policies, targeting mostly young men in the black community, including a quarter million S&Fs without arrest, in one three-month period a year ago. But none was forthcoming.

Under Rahm's regime, cops have been doing S&Fs at four times the rate of New York and we have overtaken NYC as the S&F capital of America (the world?).

And then there's the school closings. No I'm sorry there either.


If Emanuel truly wants to do more than just put on a fuzzy sweater and say that he “owns” these issues, he’ll have to address how his decisions such as closing 50 neighborhood schools, half the city’s mental health clinics, funneling money to big business in the loop and more, have disaffected the people in neighborhoods of color, who live with those decisions, which are tied to police violence, everyday.

Couldn't have said it any better.