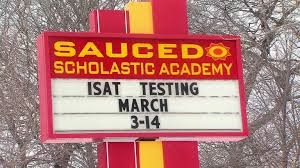 There's 3 good letters and one crappy one in this morning's Trib. Julie Woestehoff writes re. the ISAT test boycott calling on Rahm, BBB, the Board and ISBE to "respect parents' rights to direct our children's education, to treat students who opt out respectfully and ethically, and, most important, to change the fundamental values in this district and this state that continue to prioritize test scores above high-quality education for all our children."

We believe that schools are the most important democratic institutions in America, and that our children are our democracy's future.

Boycott Support...The CTU has received statements of support from the Faculty Association of the University of Chicago Laboratory Schools, the Chicago Alliance of Charter Teachers and Staff and nationally recognized educators for families and teachers who have opted out of the ISAT. Nearly 2,000 students at 90 schools—including charter schools—were opted out of this year’s ISAT, joining teacher-led decisions to teach instead of test at Saucedo Scholastic Academy and Drummond Montessori School.

In a public petition released Monday, more than 50 educators and researchers, including well-respected figures in the field of education, pledged support for the ISAT boycott and called on Chicago’s mayor and schools chief to rescind threats of punishment for those who participated in the action. Among the signers of the statement are CTU President Karen Lewis, American Federation of Teachers President Randi Weingarten and former U.S. Assistant Secretary of Education Diane Ravitch. 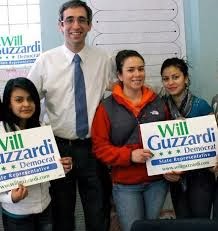 DISGUSTING...Count on the Sun-Times to pose the Will Guzzardi/Toni Berrios race as one between "hipsters" and "Hispanics."

Will takes 'em on:


“This is an election to decide what kind of Democrats we want to have in Illinois. When we have a speaker who wants to cut corporate taxes in half, it makes you wonder what kinds of Democrats we’re talking about.”

He also blasts Michael Madigan, the state House speaker and Democratic Party leader from the Southwest Side, for cuts to public-worker pensions. And he criticizes Toni Berrios for helping create a state charter-school agency. Two years ago, Guzzardi almost defeated Toni Berrios, without the endorsement of a single elected official in the district. That near-miss and his left-leaning positions have won Guzzardi the backing of the Chicago Teachers Union, state Sen. Willie Delgado and City Council members Joe Moreno (1st), Scott Waguespack (32nd) and John Arena (45th).

Vow of silence...Berrios claims somebody "harassed" her while she was out canvassing. So she's refusing to talk to the press the rest of the campaign. But I hear that Boss Madigan and Big Daddy Berrios have muzzled her and have taken the campaign over from Toni's own team. They don't like losing.