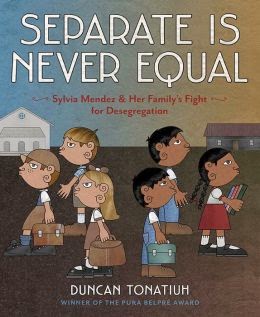 I get lots of great books in the mail. I wish I had time to read and review them all. Today I got one of the best. It's called Separate is Never Equal: Sylvia Mendez and Her Family's Fight for Desegregation (Abrams Books for Young Readers). It's actually a kid's book, beautifully written and illustrated by Duncan Tonatiuh.

It tells the story of the Mendez family's move to the farm community of Westminster, California in the 1940s, well before the rise of the southern Civil Rights Movement. When the school system refused to allow their children to attend their community school and were forced to go the inferior "Mexican School" the family refused to passively accept their fate, and the hurt and racist abuse their children were forced to  suffer.

With community support and the the help of a civil rights lawyer named David Marcus, they began a long and difficult journey, through the state's legal system that ultimately ended in a favorable higher court decision. Groups like LULACS, the NAACP, the Japanese American Citizens League, the American Jewish Congress and others lent their support and resources. In June, 1947, a Republican Gov. Earl Warren, who would later become Pres. Eisenhower's Chief Justice of the Supreme Court, signed the law that would overturn separate but "equal" schooling in the state. 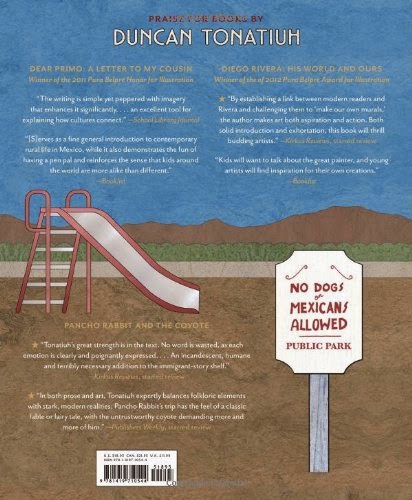 While the separate-but-equal doctrine has long been overturned, de-facto school re-segregation is on the rise again along with urban gentrification, the spread of privately-run charter and selective-enrollment schools. Two-tier schooling called "choice" has become the favored policy by the U.S. Dept. of Education under Arne Duncan and schools in President Obama's home town of Chicago are as at least as segregated and even more so than they were in 1954.

Published in time for the 60th anniversary of the Brown v. Board of Education Supreme Court decision, Tonatiuh's book is the only picture book that tells this inspiring tale. I would say it's appropriate for children 7 and older. I'm going to make sure a copy lands in the library of my grandson's elementary school.
Posted by Mike Klonsky at 5:39 PM