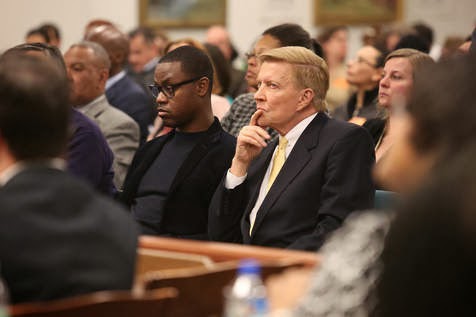 In Monday's interview with Fran Spielman, Rahm claims Toni Preckwinkle has promised him that she won't run against him in 2015.


Emanuel says he takes Preckwinkle at her word, even though she’s been the most outspoken critic of the mayor’s school closings, charter openings, school budget cuts and the seven-day teachers strike that Emanuel’s bullying missteps helped to instigate.

If he's telling the truth (big if) that appears to leave Ald. Bob Fioretti as the only viable candidate standing in the way of the mayor's re-election. Fioretti has been the leader of the City Council's Progressive Caucus and an outspoken critic of the mayor's, especially on school closings. That alone should gain him lots of support, not only from teachers and north-side parents, but on the city's south and west sides where there's growing anger in the black community over Rahm's school closings, lack of community development, and massive cuts in social services.

But in a low turn-out election, can Fioretti stand up to Rahm's $6 million (and growing) campaign war chest, even with backing from the CTU and other public employee unions? Can he somehow emerge as Chicago's Bill de Blasio? It's hard to say but worth a try. It will certainly take a strong, independent community-based movement, led by labor, of the sort that drove the New York election.

One factor that may make Rahm vulnerable, aside from the fact that most Chicagoans dislike him and think he's an ass (my informal tavern poll) is the widening split between him and the Daley clan. Since Emanuel took office three years ago, he has continually complained about the mess he inherited when he was elected to succeed Rich Daley. He does it again in the Spielman interview.

CTU Pres. Karen Lewis was the main speaker at the event.


One fundraiser attendee, leaning his head across the room in the direction of Michael Daley and Georges, said, “I’m still trying to get my head around that."


Although he’s received some contributions from Michael Daley’s firm in the past, Fioretti acknowledges he too was surprised to see one of the former mayor’s brothers breakfasting with his supporters and writing a check that could go toward trying to unseat Emanuel next year.

For almost a year, Lewis has pined loudly for someone to beat Emanuel in 2015. Fioretti won’t rule out doing that, saying he’ll decide in the next two to three months.

Daley and Georges were asked what they thought of Karen's speech.


“I was very impressed,” Georges said. “She is very articulate ... a very good speaker.”

Georges wouldn’t comment, though, on what she thought of Lewis’ viewpoints. The union leader’s remarks at the Fioretti event featured a call “to change the political landscape" here.