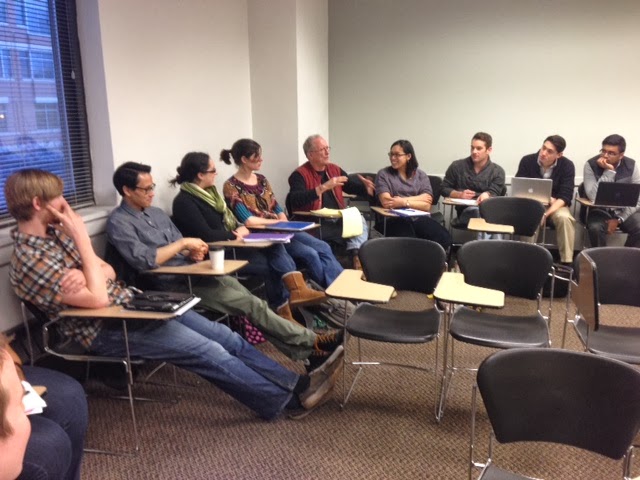 THANKS to Bill Ayers for being an inspiring guest speaker in last night's final class of the quarter. Congratulations are also in order for Bill who has been voted to receive the Lifetime Achievement Award at the upcoming AERA convention in Philly on April 4 at 6 pm. Bill says he's worried that such awards mean you're at the end of the line. But I think his best is yet to come.

Last week's NPE Conference in Austin ended with Diane Ravitch's call for congressional hearings on the misuse and abuse of standardized tests used for high-stakes purposes. The Washington Post's Valerie Strauss reports that at a conference in Austin this past weekend, just before the start of SXSWedu, Diane picked up surprising support for her call from Education Secretary Arne Duncan’s former communications director, Peter Cunningham, as well as from AFT Pres. Randi Weingarten.

Speaking of Ravitch... Diane posts at Huffington that the smear campaign against N.Y. Mayor Bill de Blasio is continuing full blast. She does a fact check to counter the B.S. coming directly from charter school hustler and former mayor Bloomberg's pal, Eva Moskowitz.


De Blasio did not abandon charters or evict children from charters. The attacks on him are a power play by charter operators, specifically Moskowitz, to restore the good old days of the Bloomberg administration, when her requests were never turned down. This blowup is also intended to send a message to de Blasio not to mess with charter schools. While it is true that they enroll only 3 percent of New York state's children and only 6 percent of New York City's children, their boards contain the city's financial elite. They can pay millions for a media campaign; they can make $800,000 in campaign contributions to Governor Cuomo, but they refuse to pay rent.

New York public school teacher Brian Jones, who co-produced The Inconvenient Truth behind Waiting For Superman, held his own last night on Chris Hayes' show, defending the Mayor's charter school policies, in a debate with James Merriman, CEO of the N.Y. Charter School Center. You can watch it all here.

Check out the results so far from MSNBC's poll on charter schools. The poll question: Poll: Should more resources be devoted to charter schools? 92% vote NO.