A third of black & Latino families have no wealth 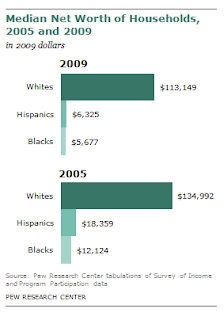 Hispanic families accounted for the largest single decline in wealth of any ethnic and racial group in the country during the recession, according to a study published Tuesday by the Pew Research Center. Moreover, about a third of black (35%) and Hispanic (31%) households had zero or negative net worth in 2009, compared with 15% of white households. In 2005, the comparable shares had been 29% for blacks, 23% for Hispanics and 11% for whites. The median wealth of Hispanic and black households is at its lowest point since 1984, when the Census Bureau first conducted the study, the report said.


“It’s a very stark reminder of the high share of minorities who live at the economic margins of this country,” said Paul Taylor, executive vice president of the Pew Research Center and an author of the report. “These data really show their economic vulnerability.” -- New York Times

To the "no excuses" crowd: Will the widening poverty gap be reflected in the so-called educational "achievement gap? You bet.
Posted by Mike Klonsky at 5:35 AM