Another reason why teachers shouldn't fall for the old "bonus" scam 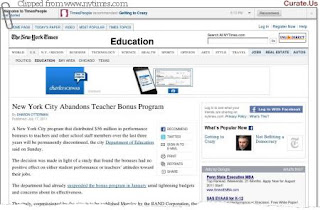 In some districts it's called "merit" or "performance" pay. In others, it's simply called a "bonus." However they're branded, bonuses have become a center piece in corporate-reform strategies which are increasingly being used to undermine collective-bargaining agreements and pit teacher against teacher.

In D.C., these one-time-only pay bumps were used by Chancellor Michelle Rhee to get surviving teachers to accept the firing of hundreds of their colleagues. Rhee used private funds from Gates, Broad and other power philanthropists to underwrite the bonuses while foisting a horrible contract of D.C, teachers and their unions. The bonus offers could later be removed if and when corporate reforms were resisted, when the money dries up, or simply at the whim of the foundations. But the teachers who lost their jobs in the bonus deal, will never be called back to work.

In other districts like Los Angeles, performance bonuses are  tied to a value-added formula which supposedly shows how much each individual teacher adds to their students score on standardized tests. Similar programs have been tried as pilots in Chicago and across the state of Florida, but dropped as soon as corporate funding dried up, leaving in their wake busted contract agreements and a climate of mistrust, fear, and anger.

Yesterday's New York Times reports that the city's $56 million teacher performance bonus program has been permanently discontinued. The decision was made in light of a RAND study that found the bonuses had no positive effect on either student performance or teachers’ attitudes toward their jobs.


The results add to a growing body of evidence nationally that so-called pay-for-performance bonuses for teachers that consist only of financial incentives have no effect on student achievement, the researchers wrote. Even so, federal education policy champions the concept, and spending on performance-based pay for teachers grew to $439 million nationally last year from $99 million in 2006, the study said.

Shamelessly, the same bureaucrats who had touted the bonus system are now saying, "oh, never mind" or even declaring victory and putting it behind them.


City officials did not dispute the study results, but they said they did not believe the money was wasted, and indicated that they would continue to seek a merit pay model that worked.

“In January, we suspended this program out of concern about its effectiveness,” said Barbara Morgan, a spokeswoman for the Education Department. “This study confirms that was the right decision, and provides us with important information as we continue to think about compensation models that differentiate among the performance of our teachers.”