At the AFT conference in D.C.

NYT reports: Amid one of the most contentious periods in recent memory for teachers’ unions, the president of the American Federation of Teachers, Randi Weingarten, on Monday called for education reform that emanates from teachers and their communities, rather than from “those who blame teachers for everything.”


In an interview afterward, Weingarten condemned the Atlanta situation but pointed to the role of the local teachers’ unions in helping uncover it. The cheating itself, she said, was a byproduct of when “targets become more important than learning” and of a teaching climate that in many areas has become “intimidating, fearful and retaliatory.” 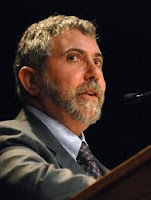 Weingarten was followed by economist and NYT columnist Paul Krugman.  The reason why public sector workers earn more than the typical American, Krugman said, is because so many public sector workers are teachers, and teachers are more highly-educated than the average American. Even so, teachers continue to earn less than similarly-educated workers in the private sector.


"People want to run education like a business and you can't quite turn every classroom into a profit center. But you start looking to these measurable metrics and it doesn't work that way. It doesn't work that way by and large very well in business. You look at the systems that do really well internationally, like the French system and the Finnish system...they repsect teachers, they pay a lot of attention to education, they provide healthy and nutitrious school lunches...They don't say we're going to have some scorecard that is entirely mechanical. More importantly, [standardized testing] is taking our eye off the ball, which is providing a good education." -- Dana Goldstein,  Ladywonk.