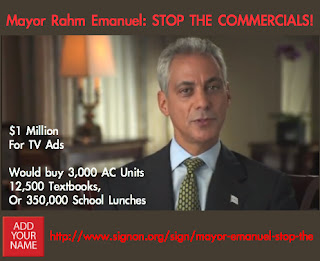 
It’s obvious why Mayor Rahm Emanuel is airing boastful commercials that you correctly term “a poke in the eye” of the Chicago Teachers Union. He is trying to rehabilitate himself with the public that overwhelmingly supported the striking union — while a mere 19 percent thought he was handling the situation properly. This is the first time the mayor has been upside-down in any polling, and he believes he needs damage control and a way of claiming victory.

What is most distressing is not simply that he continues to generate bad will with teachers through this expensive ad campaign, but that he accepts its financing from anti-union advocacy groups whose acknowledged goal is the destruction of teachers unions and, by extension, the eventual breakup of public education itself.
Don Rose, Old Town

Give it a rest, Rahm


Dear Mr. Mayor: It is far too early to be campaigning for re-election. Stop the commercials and radio ads already. Tell your rich hedge-fund friends to use the money spent on these misleading commercials to help the children of Chicago. You know, those kids whose parents can’t afford the Lab School. Show the children of Chicago you truly have their best interest at heart by forging a relationship with the CTU and draw a line in the sand and play fair.
Linda Hudson, Avalon Park