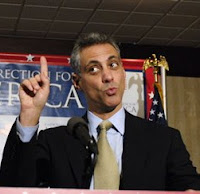 No wait, the headline is wrong. The latest from Charlotte is that Rahm Emanuel hasn't been dumped. He's been promoted. Yes, that's right. He's moving up the party ladder from campaign chair to fundraiser. If you read the Washington Post (and who doesn't these days?) that's the story line behind Rahm being dropped as honorary chairman of the Obama campaign. You see, he was removed so he could "help raise big-dollar contributions so that Democrats can compete with what is emerging as a clear GOP fundraising advantage this election cycle." This according to unnamed "campaign and fundraising individuals."

As we all know, campaign chairs can't fund-raise. Right? They're too busy doing, ummm, other things or something. And of course this promotion has nothing to do with the fact that Rahm's name has become toxic, synonymous with anti-teacher anti-unionism , much like Wisconsin's Gov. Walker on the Republican side. We know this because the unnamed "campaign and fundraising individuals" in the Post story never mention it.

That's their story and they're sticking with it.
Posted by Mike Klonsky at 9:43 AM