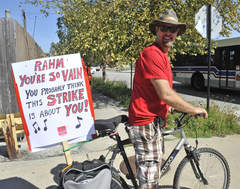 Out on the picket lines I saw teachers in small groups, reading the tentative contract, line-by-line and discussing it. Talk about your participatory democracy. Here it is, right on the mean streets of Chicago. No wonder Rahm and his corporate pals are horrified. No wonder he's asking for an injunction. Reading a contract before you sign it is a concept so beyond anything that ever takes place in Rahm's City Council or in his hand-picked Board of Education, it seems downright revolutionary. Or to quote Rahm, "a threat to public health and safety."

Best headline in the S-T today: Judge punts on forcing teachers back; no school likely Tuesday.

Makes you wonder what's happened to the city's once-powerful political machine when the mayor can't even find a judge willing to do him a favor -- NOW! Old man Daley must be turning in his grave.

Best column comes from Laura Washington,‘Shadow strikers’ marched with CTU , who spotlights the CTU's deep base of support in the communities, in large part a result of the city's many community-based organizations.


Community organizing is embedded in Chicago’s DNA. Jane Addams, Saul Alinsky, Harold Washington and Barack Obama all tapped the strategy to force social change at crucial moments in the city’s history. This is one of those moments. Organizing took a big hit when Mayor Rahm Emanuel took City Hall. During the 2011 mayoral campaign, Emanuel ignored “countless” invitations to community forums and requests for meetings to hear their concerns. 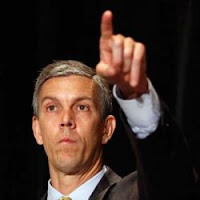 Once again I'm thinking back a few years ago when Arne Duncan made mayoral control of the schools his own personal hill to die on. "At the end of my tenure, if only seven mayors are in control, I think I will have failed," Duncan told a forum back in 2009.

Chicago is now into its third decade of mayoral control. CPS is now a wing of probably the most corrupt City Hall in the country, and Rahm has become the poster child for the toxicity of autocratic control by the mayor. This can also be said of  Bloomberg in New York and half a dozen others. I don't hear Duncan giving such speeches today and I sure didn't see him rushing into town to support his mayor pal in his moment of distress.

As soon as this strike ends, community activists can get back to their so-far successful petition drive to have an elected school board in Chicago and finally put an end to one-man rule over the schools.