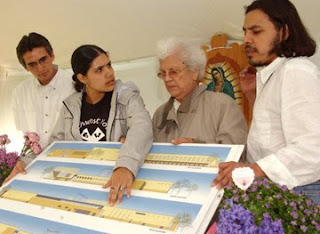 Little Village hunger strikers and supporters created the school
I'm sickened by a message I received this morning telling me that the Race To The Top teacher purge has begun in earnest in Chicago with mass firings at Little Village High School's Multicultural Arts School. Readers will recall that LVHS was created as a campus of four small schools,  by parents and community members in this mainly-Mexican community, following a 19-day hunger strike in 2001.

The message from a not-yet-fired LVHS staff person reads in part:


Patricia Gonzalez, the new principal at MAS, fired everyone. All but 4 have reported that they were notified, most by voicemail...She fired tenured founding teachers with superior evals. She must be using that Race To The Top crap that I hear created a loophole. 4 teachers with new babies... Do the hunger strikers know about this?

Email ThisBlogThis!Share to TwitterShare to FacebookShare to Pinterest
Labels: Chicago, Race to the top, small schools