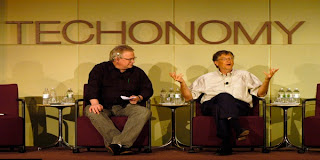 Billionaire Bill proved once again that you don't have to be all that smart to be the world's second-richest man. At the recent Techonomy conference, Gates thanked God for charter schools and wrote off any possibility of  "innovation" coming from within the public school system. (The Daily Riff)

Actually it was public school teachers who created the original charter schools (God was busy that day helping Microsoft's lawyers settle their anti-trust case so the teachers asked us for help). This alone shows a big problem in Gates' thinking. If innovation isn't generated from within the public schools system, how do you explain the birth of charter and small schools?

Speaking of the Post, they ran this story, page 1 on Saturday, where the FDA assures us that the dispersant COREXIT, used in massive quantities by BP to break up oil globs in the Gulf, is NOT harmful when ingested by humans (that's us). My tip for investors like Warren Buffet, who already owns millions of shares of NALCO (NLC)  producer of COREXIT--buy more. It's currently trading at only $24.5/share.  My tip for fish eaters, this stuff goes great with crab meat or shrimp.


Business 'standards'
Hewlett-Packard is big into the e-Learning business and is a big player in the world of ed philanthropy. But last week, HP's CEO Mark Hurd was forced to resign after he was caught diddling around with a company contractor on company time and on the company dime. OK, stuff like this goes on all the time in the biz world. No big deal, right? But the statement that caught my on this story was:


The shakeup stems from an internal investigation launched after a former HP contractor came forward to accuse Hurd of sexual harassment. A subsequent investigation overseen by HP's board found there was no violation of the company's sexual harassment policy, but concluded Hurd had violated standards of business conduct. (Tech Chronicles)

So the obvious question is, why the gap between HP policy on sexual harassment and "standards of business conduct"? Then I wonder about the size of Hurd's golden parachute.