Talk about "retrograde" -- how about turning back clock to 1868 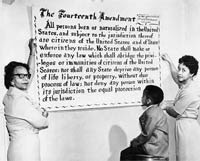 In case you've you've forgotten why the Republicans need another butt-whupping in the upcoming midterm elections (I almost have), here's a reminder. The latest GOP game plan includes the repeal of the 14th Amendment. You know, that's the one that guaranteed full and equal rights for African-American, former slaves in 1868 and overruled the Dred Scott decision, which held that black people could not be citizens of the U.S. The 14th Amendment also became the basis for Brown v. Board of Education (1954).

The Republicans' target in 2010 is no longer fugitive slaves, but rather undocumented immigrant workers. Repeal will allow laws like Arizona's SB 1070 to remain in place. While repeal has no chance of passing (unless frightened Dems decide to "reach across the aisle"), the campaign provides another wedge issue around which the party's anti-immigrant base can be mobilized for the mid-term elections. The party's brigade of racist demagogues is led by Minority Leader Mitch McConnell, Arizona's Jon Kyl and newcomer to the cause, Lindsey Graham,

I'm watching to see if Democrats stand up or wilt on this as elections grow near.
Posted by Mike Klonsky at 6:23 AM