Duncan: 'I feel your pain' 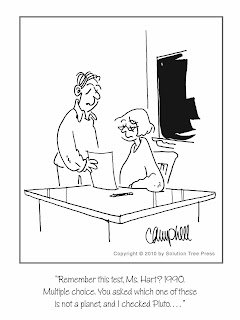 Speaking in Arkansas, Duncan offers his Race To The Top, replete with winners & losers, testing madness, union busting, and mass teacher firings, as part of a new "civil rights movement." But most civil rights groups are openly critical. And why not? They've been opposing two-tier funding of segregated public schools since they were created.

The sickest part of Duncan's speech, the part that is bound to breed the most cynicism, was about the L.A. Times recent publishing the names and pictures of district teachers with their supposed individual, value-added quotient attached. Duncan was the first to openly laud the publication.

Now he says: "I appreciate how painful this may be for these L.A. teachers, and I also appreciate the fact that even the best data systems won't tell the whole story." He feels their pain, sorta. But what the hell, let's stick it to 'em anyway.

Then comes the topper--AD says:


"We didn't publish this in a newspaper in Chicago and I don't advocate that approach for other districts -- but the fact that teachers did not have this information is ridiculous."

What? A mixed message? You don't advocate this approach for other districts? But why not?

Duncan knows full well that this public shaming and debasing of many excellent teachers who work under the most difficult conditions, with low-scoring kids, is not about sharing information with them.

But while he doesn't recommend it, he applauds it.


******
Habits of mind? Are you kidding?
On second thought, that wasn't the sickest part. The sickest part was this throw-away line:


We trust that high-quality teachers — rich in content knowledge, confident in their skills, and poised to teach habits of mind — are the people who will turn our students into autonomous learners."

Duncan's speech writer, Peter Cunningham must have been reading a little Ted Sizer. I'd love to see the look on Deb Meier's face when she reads that. I wonder where habits-of-mind show up in the Times' test score, value-added formula?
Posted by Mike Klonsky at 7:15 AM