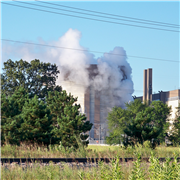 Exelon Corp.was in the news here in Chicago twice in one week. First as the parent company of Commonwealth Edison, the largest operator of the country's nuclear plants and then as a major supporter of charter schools.

At Exelon's Braidwood plant, neighbors were awakened Monday morning, by a thunderous noise. Steam was billowing from the plant after a malfunction of the cooling system and Tom Zimmer, who lives next door to the plant, says it sounded like a tornado or jet engine.


"It’s been up and down, real, real loud. I mean last night at 2:18 it woke me up. I thought the place was gonna blow. Matter of fact, the wife said she thought it was over with for us out here, you know." (City Room)

But Exelon execs as well as a guy from the NRC assured neighbors that it was only "low levels" of the radioactive isotope, Tritium, blowing into their living rooms and not to panic.


Tritium occurs naturally but is produced in greater concentration in nuclear reactors. The isotope can increase the risk of cancer but is considered one of the least dangerous radioactive substances because it leaves the body quickly, according to the U.S. Enivronmental Proctection Agency. This March, Exelon agreed to pay more than $1 million to settle lawsuits filed by Attorney General Lisa Madigan after the company allowed radioactive tritium to leak outside three nuclear power plants. (Tribune)

Exelon is also among a host of corporate giants, including names like Dell, Baxter, Walton, Pritzker and Gates, whose donations are the only thing keeping the mayor's favored charter schools alive.

Interesting thing about all this, is that Exelon recently froze executive salaries because of the company's heavy losses in the recession. CEO John Rowe, after whom one of Chicago charters is named, saw his total compensation for 2009 fall 40 percent to $6.3 million. Now that's what I call merit pay. Donations to Mr. Rowe and his family can be sent here and I promise I will forward them on.

Keeping the 'private' in private philanthropy

Richard Marker, an adviser to donors and a professor at New York University's Center on Philanthropy, tells the mega-foundations not to sign on to any "external standards" of helping the poor or racial/gender diversity. He's fears that philanthro-capitalism is loosing its independent edge.


Philanthropy, too, needs to be careful about caring too much about what's popular or what the majority thinks, he says. Efforts to push private philanthropy away from being so "private," by creating consensus measurements around societal needs, could be harmful, says Mr. Marker. (Journal of Philanthropy)

He needn't worry too much. The Gates Foundation has consistently rejected any and all such consideration when it comes to their investments.

The Washington Post Company said on Monday that its reliable profit center, the Kaplan Higher Education division, may come under serious pressure if new federal rules meant to rein in the for-profit college business go into effect. (NYT).


Among the incidents uncovered at the Pembroke Pines location, an admissions officer falsely told an applicant that the school had the same accreditation as Harvard and the University of Florida. The officer wouldn't let the applicant speak to a financial aid representative until she signed an enrollment contract. And he told her not to worry about repaying student loans because "tomorrow's never promised." (Sun-Sentinel)


The stand-up thing would have been to fire Mr. Hurd on the altogether legitimate grounds that the directors didn’t have faith in his leadership. But of course Wall Street would have had a conniption if the board had taken such a step. So instead, it ginned up a tabloid-ready scandal that only serves to bring shame, once again, on the H.P. board. (Joe Nocera, NYT Talking Business)

H.P. is a major player in ed philanthropy and current school reform and charter initiatives.
Posted by Mike Klonsky at 4:59 AM